'Madrid rolled over by a train': Spanish papers tear into Real following their Champions League exit at the hands of Chelsea... as Marca label them 'exhausted and out of place' and AS call them 'shaken and out on the street' 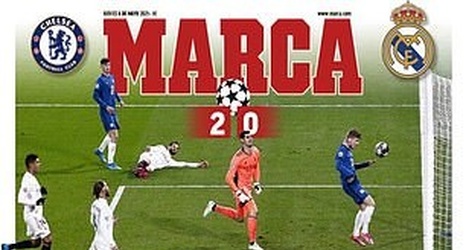 Real Madrid have been slammed by Spain's sport newspapers on Thursday following their Champions League exit at the hands of a dominant Chelsea.

Marca, AS and Mundo Deportivo were among the big-name publications tearing into Zinedine Zidane's men, after they crumbled at Stamford Bridge and were unable to stop Chelsea winning 2-0 to book their spot in the Champions League final.

Marca's headline read: 'Madrid rolled over by a train', as they slammed Zidane's 'exhausted and out of place' squad, also taking aim at the managers' tactics, saying Sergio Ramos and Eden Hazard shouldn't have started the game.