Is history repeating itself at Leicester? With the Champions League in sight Vardy has lost his form ahead of a super-tough run-in... so can Rodgers' men forget last season's agony - and their Covid rules row - to cling on? 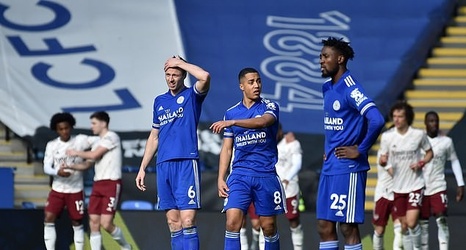 Leicester City's impressive bid for Champions League qualification once again looks set to go down to a nail-biting finish following a 3-2 defeat by rivals West Ham earlier this month.

The Foxes sit third in the Premier League, with Brendan Rodgers' side again punching well above their weight throughout the campaign.

However, the gap has shrunk to the teams behind them in recent weeks due to an in-form West Ham, Chelsea's improvement under Thomas Tuchel and a resurgent Liverpool all closing in with seven games to go.

Leicester gave up a 14-point advantage over Manchester United last season to miss out on the Champions League on the final day of the season and are determined to avoid a repeat this time round.