'If your kids go from biting to pinching, you're doing alright!': Luis Suarez gets away with pinching Antonio Rudiger, as Joe Cole and Rio Ferdinand joke about the 'cute' striker's history of chomping down on his opponents 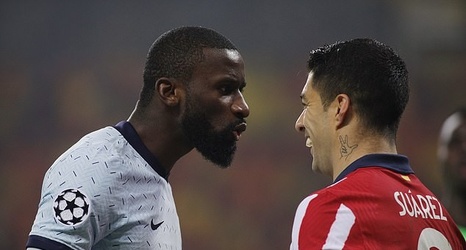 Luis Suarez got up to more antics on the football field again on Tuesday evening as Atletico Madrid took on Chelsea in the Champions League.

With Chelsea 1-0 up and cruising to a first leg victory in their last 16 game, Suarez and Antonio Rudiger got into a little confrontation by the goal line.

Looking at the replay from another angle, it became clear that Suarez had given Rudiger a cheeky pinch to the inside of his thigh.

Rudiger, clearly not impressed, had a few words for the Uruguayan as well as a push, and the pair squared up momentarily before being separated by the referee.