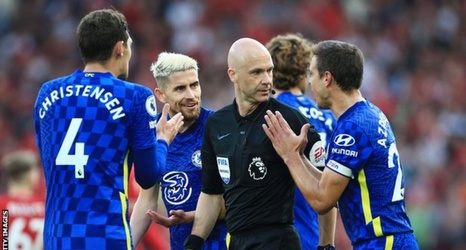 Chelsea have been fined £25,000 by the Football Association for failing to control their players following Reece James' red card at Liverpool in August.

Referee Anthony Taylor sent James off for a goal-line handball which led to Mohamed Salah levelling from the spot.

The Chelsea players were angered by Taylor's decision, insisting the ball had struck the England full-back's thigh before hitting his arm.

"Chelsea FC has been fined £25,000 for two breaches of FA rule E20.1 which occurred during their Premier League fixture against Liverpool FC on Saturday 28 August 2021," read the FA's statement.