Chelsea pair Romelu Lukaku and Timo Werner out for 'some matches' 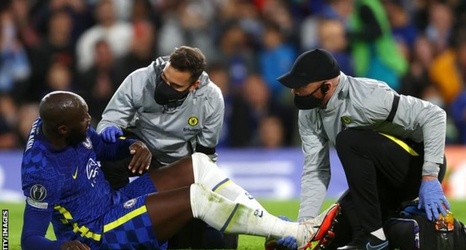 Chelsea striker Romelu Lukaku and Timo Werner will both miss a few matches after being injured in the 4-0 Champions League win over Malmo, confirmed boss Thomas Tuchel.

Lukaku twisted his ankle in a tackle which led to a penalty and Werner hurt his hamstring while running - both in the first half.

"It will take a while for both of them, and we will need more examinations to be precise," said Tuchel.

"They will be out for some matches."

Chelsea have a relatively straightforward run of games against Norwich, Southampton in the Carabao Cup, Newcastle, Malmo and Burnley.