Chelsea have finally 'worked their youth system out' claims Rio Ferdinand, who praises Frank Lampard and Thomas Tuchel for giving chances to graduates after THREE scored in Champions League hammering of Juventus 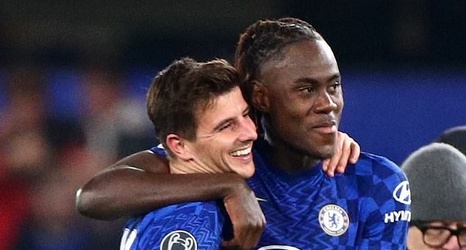 Rio Ferdinand believes Chelsea have finally realised the potential of their youth system after a string of the Blues academy graduates helped destroy Juventus.

In Trevoh Chalobah, Reece James and Callum Hudson-Odoi, three of Chelsea's goal scorers in a 4-0 win over the Italian giants in the Champions League were from the Blues academy.

Another in Ruben Loftus-Cheek even set up Hudson-Odoi's effort with fancy footwork inside the box to cap an extraordinary evening for the European champions, with Timo Werner scoring a fourth goal in stoppage time.

Ferdinand believes that after years of wasting money on the project, Chelsea have finally found a winning formula, that was kickstarted by previous boss Frank Lampard and continued on by current manager Thomas Tuchel.