'Chelsea are NOT contenders': Jimmy Floyd Hasselbaink insists his old side won't challenge for the Premier League title because of their 'leaky' defence as he praises 'real deal' Timo Werner after his brilliant brace 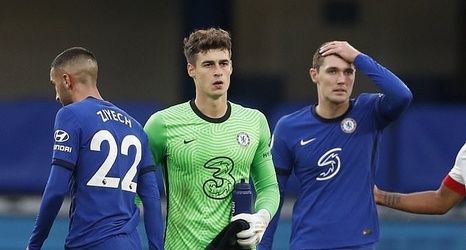 Former Chelsea striker Jimmy Floyd Hasselbaink has dismissed his former club's chances of winning the Premier League this season because he believes they are conceding too many goals.

The Blues threw away winning positions on two occasions on Saturday as they drew against Southampton at Stamford Bridge, with the three strikes conceded meaning they have now shipped 63 league goals in Frank Lampard's 43 games as boss.

Chelsea's £220million summer splurge saw the club recruit attacking talents Timo Werner and Kai Havertz, and while Hasselbaink admits their play going forward is a 'fresh of breath air', he admits the performances of the defence and goalkeeper Kepa Arrizabalaga remain a worry.