'Bottles were flying, tables were smashed, it was really crazy': John Obi Mikel reveals how Chelsea players lost it in tunnel 'chaos' after Didier Drogba's 'f***ing disgrace' referee rant against Barcelona in 2009 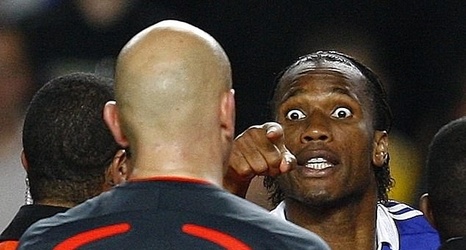 John Obi Mikel has opened up on the carnage he experience in the Chelsea dressing room moments after their controversial Champions League semi-final exit at the hands of Barcelona in 2009.

The last-four encounter at Stamford Bridge was infamously branded a 'f***ing disgrace' by Didier Drogba on live television, after referee Tom Henning Ovrebo had ignored four penalty appeals from the hosts on the night.

Barcelona won the second leg of the semi-final tie with the Blues on away goals thanks to a late strike by Andres Iniesta, while Ovrebo admitted years later that he made several mistakes during the encounter.