Alvaro Morata was a £60m flop at Chelsea but is back to his best with Juventus and Spain... from Diego Forlan to Jon Dahl Tomasson - which other forwards have had success after failing in the Premier League? 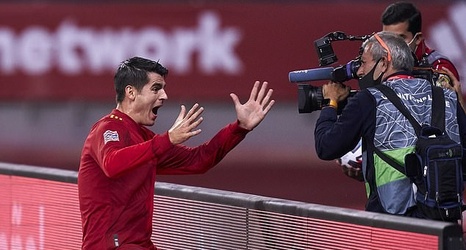 Alvaro Morata's performance for Spain against Germany in midweek was a timely reminder of what could have been for him at Chelsea.

As well as getting himself on the scoresheet, he got one over new Blues forward Timo Werner with a sublime piece of skill which saw him pirouette away from the German striker - Maradonna style.

Morata's struggles at Stamford Bridge are well documented but since leaving England he has started to show why the London club broke their transfer record to sign him in 2017.

He is not the only attacker to have failed miserably in the Premier League and gone on to have success elsewhere.