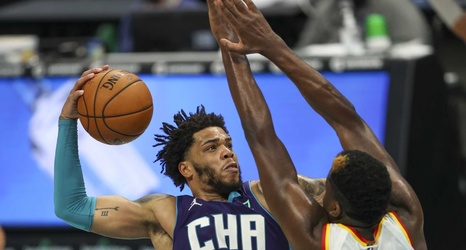 Former Rockets center Clint Capela is having the best season of his seven-year NBA career, averaging 15.3 points and leading the NBA with 14.1 rebounds per game. His 2.2 blocks is the best mark of his career and third in the NBA.

None of that mattered Sunday when the Hawks center was caught on the train tracks with the Miles Bridges locomotive headed right at him.

With the Hornets up 97-94 and about four minutes left, Capela successfully contested a shot at the rim, but the ball ended up back at the perimeter in the hands of the high-flying Bridges.