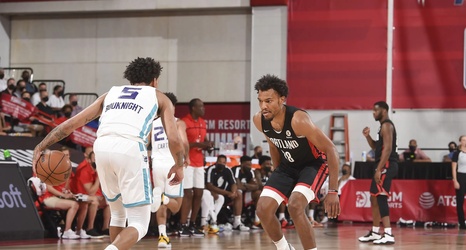 The results of these games don’t matter as much as the individual storylines, so we’ll skip most of the play-by-play recap and focus on the main takeaways, but in short, the Charlotte Hornets fell behind earlier and yo-yoed between a double digit deficit and a one possession deficit for the rest of the game. The Blazers had an absurdly experienced summer league team, featuring players like Michael Beasley and Kenneth Faried. They also had George King and Anotnio Blakeney combine to score 44 points on 15-of-18 shooting, and that’s tough to overcome.

As for the Hornets, I have a few takeaways to talk about.