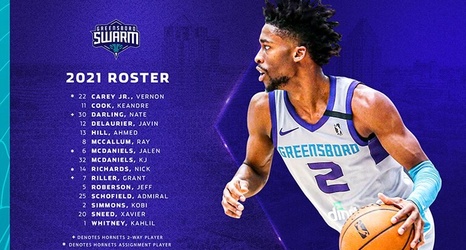 January 27, 2021 (GREENSBORO, N.C.) – The Greensboro Swarm, the NBA G League affiliate of the Charlotte Hornets, today announced its roster for the 2020-21 NBA G League games at the ESPN Wide World of Sports Complex at Disney World Resort near Orlando, Florida. Prior to the release of this roster, the Hornets have assigned Vernon Carey Jr., Jalen McDaniels and Nick Richards to the Greensboro Swarm pursuant to the league’s single affiliate assignment rules. Additionally, two-way players Nate Darling and Grant Riller have been transferred to the Swarm.

The Swarm will compete against the 17 other G League teams participating in the single-site in a predetermined schedule culminating an eight-team single elimination playoff.