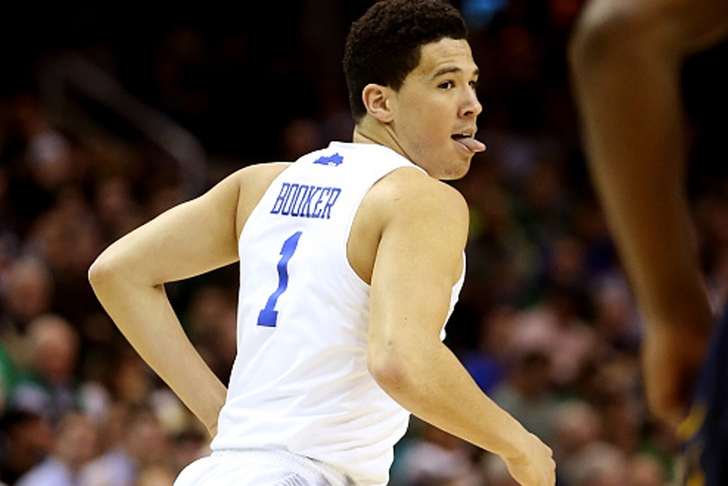 The Charlotte Hornets have the No. 9 pick in the NBA Draft, and there has been a lot of clutter to sort through as to their plans with the pick. Here are three rumors you need to know:

1) Devin Booker Prime Target For Hornets At No. 9

Charlotte’s offense has been severely hampered by a lack of outside shooting, and Booker is the best sharpshooter in the draft. However, his athleticism and overall game has some scouts thinking he could turn into a Klay Thompson-type player. Booker’s shooting will allow him to have an immediate impact off the bench, and should develop into the perfect backcourt-mate for Kemba Walker. The Hornets view him as a perfect fit for their system.

2) Hornets Hoping To Trade Up?

Even though Charlotte has a top-10 pick, that doesn't mean they aren't looking to move up in the draft, according to the Charlotte Observer:

“We’ve been talking to a lot of teams about moving up, moving backward, moving the pick all-together. A lot of things are in play,” GM Richard Cho said. What’s the likelihood of moving up in the lottery? “It depends on what we’d have to give up, but I’d love to move up."

Louisville point guard Terry Rozier is quickly rising up draft boards across the NBA, and the Charlotte Hornets have taken notice.

Rozier worked out multiple times for Charlotte, and the Hornets reportedly really liked what they saw.

At only 6’1″, Rozier makes up for his lack of height with a 6’8″ wingspan and 38″ vertical leap. He also averaged 17.1 points per game and led the ACC with two steals per game.

Charlotte is hoping Rozier falls to them with the 39th overall pick – the ninth pick of the second round – though he’s expected to be drafted late in the first round.