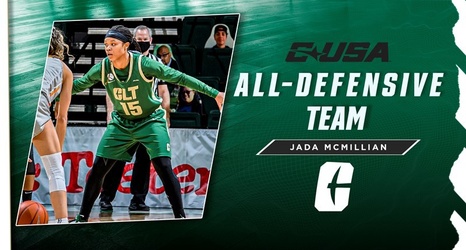 DALLAS – Charlotte junior Jada McMillian was voted as one of five players to the 2020-21 All-Conference USA Defensive Team, as announced by the league office Monday. It is her first all-defensive team award in her career.

MCMILLIAN STOPS AT PERIMETER
As the team's point guard, she helps lock down opposing offenses soon after they cross the midcourt line. She leads the 49ers with 23 steals, a 1.4 per game clip, to rank 16th in the overall conference statistics. Her league-only numbers hover around the same average, as she is 15th among her peers after swiping 17 steals, again at 1.