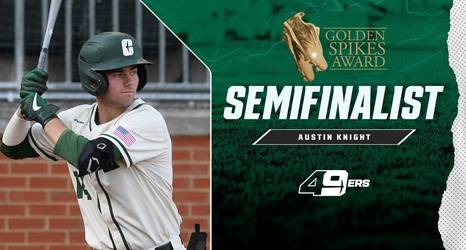 CHARLOTTE, N.C. – USA Baseball announced the 25 semifinalists for the Golden Spikes Award with Charlotte's Austin Knight moving one step closer to being named the top amateur baseball player in the country. Knight is the only representative on the list from Conference USA.

Knight was remarkable during the 2021 season for the 49ers hitting .342 while leading the nation with his 29 doubles, tied for second-most all-time at Charlotte. The third baseman put together three different hit streaks of at-least 11 games during the year and sported fantastic numbers when it really counted.