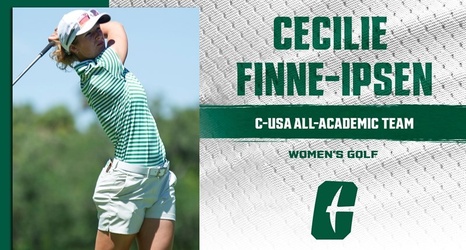 CHARLOTTE, N.C. – With a perfect 4.0 GPA, Charlotte women's golf's Cecilie Finne-Ipsen has earned all-academic honors from Conference USA announced on Friday afternoon. Finne-Ipsen is one of just five selected for the all-academic team.

In the spring, Finne-Ipsen has played in three tournaments as an individual tying for fifth at the Reynolds Lake Oconee Invitational shooting rounds of 74-75-72-221 (+5). Finne-Ipsen posted one more shot in a six-over 222 finish at the Gamecock Invitational ending the nine rounds with a 74.8 stroke average.

In the classroom, Finne-Ipsen holds her 4.0 GPA majoring in International Business is a five-time Chancellor's List and five-time Perfect Niner recipient as well as a three-time C-USA Academic Medal honoree.