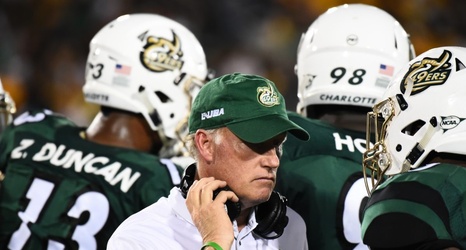 Greg Adkins will serve as the offensive coordinator for the remainder of the season, replacing Jeff Mullen, head coach Brad Lambert announced Monday. The coaching change is made after Charlotte started the 2017 football season 0-4.

Mullen has been on staff with the 49ers for seven seasons and was Lambert’s first hire. He will now move to coach the quarterbacks. Mullen has previously worked with the QB’s at West Virignia University and at Wake Forest Univesity.

Adkins previously was responsible for the offensive line and served as the Run Game Coordinator.

Adkins brings experience to the field, having coached in Power Five conferences as well as on the NFL level.