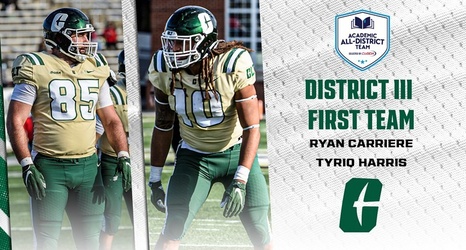 Charlotte 49ers football stars Ryan Carriere and Tyriq Harris were both named to the Academic all-District 3 Football Team as selected by the College Sports Information Directors of America (CoSIDA). The two will now be placed on the ballot for CoSIDA Academic all-America honors.

RYAN CARRIERE
Carriere, the 49ers starting tight end, owns a 3.75 GPA in Data Science and Business Analytics. The senior is a five-time selection to the Conference USA Commissioner's Honor Roll. This past year, he had four catches in the 49ers pandemic-shortened six-game season. His career-best is a 23-yard catch at Middle Tennessee and had a catch in the 2019 Bahamas Bowl.