'This is our house': Larry Austin Jr.'s heroics give CMU 88-86 overtime win 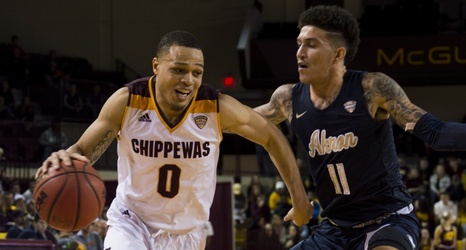 Larry Austin Jr. delivered a pass from half court, watched Rob Montgomery throw down a dunk and immediately flexed his muscles, yelling in excitement from the other end of the floor.

On Central Michigan's next possession, Austin tossed in a mid-range jumper. Then, he dropped a behind the back pass to Kevin McKay for a layup. The result was a 73-72 lead over Akron with 1:46 left.

Putting fans at McGuirk Arena on their feet, Austin's heroics seemed to be enough for the Chippewas, but then junior forward David DiLeo was called on.

Down by three and facing three free throws with 5.