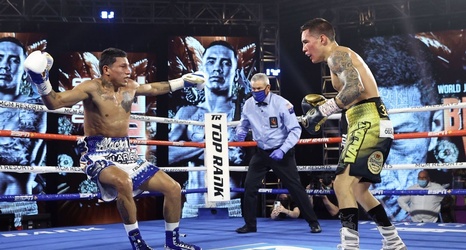 LAS VEGAS -- Many expected Saturday's WBC junior lightweight title fight between Miguel Berchelt and Oscar Valdez to be a back-and-forth battle between two Mexiican warriors. As it turned out, the violence was mostly one-way traffic.

Valdez (29-0, 23 KOs), a former two-time Olympian, scored a significant upset against a fellow Mexican in Berchelt (38-2, 34 KOs) at the MGM Grand, as he knocked out Berchelt with a left hook in the final second of the 10th round.

The stunning walk-off shot might have overshadowed the fact the much smaller Valdez, dominated the fight.