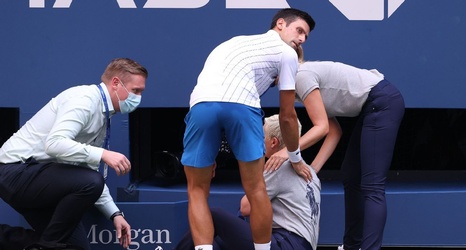 NEW YORK -- Top-seeded Novak Djokovic was defaulted from his fourth-round match at the US Open after he accidentally hit a line judge with a tennis ball Sunday.

It was a stunning end to Djokovic's bid for an 18th Grand Slam title and his 26-0 start to this season.

Djokovic had just lost a game to his opponent, Pablo Carreno Busta, to fall behind 6-5 in the first set. As he walked to the sideline for the changeover, Djokovic smacked a ball behind him. The ball hit a female line judge, who dropped to her knees at the back of the court and reached for her neck.