Undrafted Elijah Holyfield has a fighter's chance to make Panthers 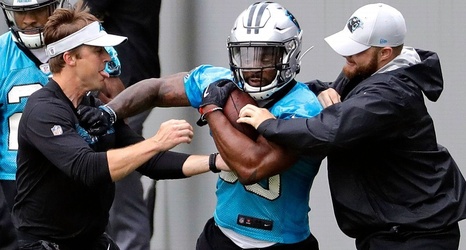 CHARLOTTE, N.C. -- Carolina Panthers running back Elijah Holyfield was 14 when he stepped into the boxing ring against a highly ranked 16-year-old. It was a chance to make a name for himself in a world where his father achieved greatness, maybe even carve a path to his own career in the sport.

Evander Holyfield, a four-time heavyweight champion and the only boxer to hold undisputed titles in two weight classes, was confident that his son was up to the challenge.

"I remember saying, 'He can handle that guy. Just don’t tell his momma, because I know she’s going to think about all the fight this guy has,'" the elder Holyfield recalled last week during quarterback Cam Newton’s celebrity kickball tournament, which was held while Elijah participated in a Panthers rookie minicamp.