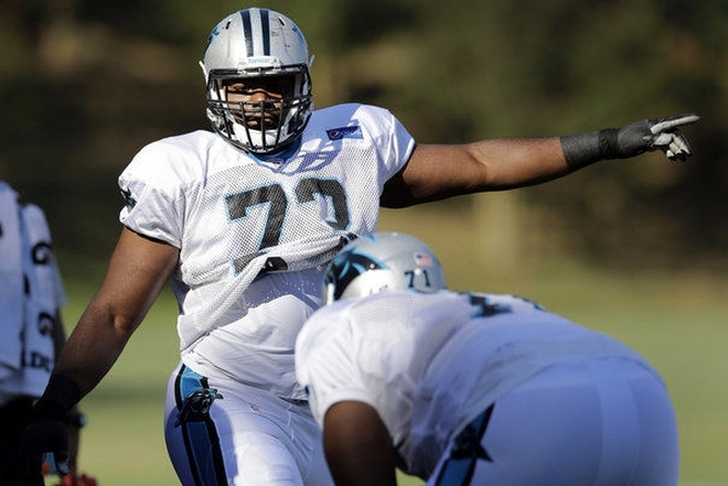 NFL training camps are always hotbeds of questions and intrigue, and the Carolina Panthers' summer activities are no exception to the rule. Here's what we've learned about the Panthers so far:

"The Blind Side" subject Michael Oher has received his fair share of criticism for a lackluster NFL career so far, but the new Carolina Panthers offensive tackle has one budding fan at least -- Panthers head coach Ron Rivera.

Via David Newton of ESPN.com:

"Coach Ron Rivera quickly came to Oher's defense when a couple of us were critical of the way Oher handled -- or didn't handle -- the speed rush last weekend. Rivera pointed out that it was the first time Oher had experienced the speed rush in one-on-one drills in pads for the Panthers -- or for any team in a few years after he spent two seasons as the right tackle at Tennessee and Baltimore. He reminded that Oher was much better in team drills, and that he did well against the run. I'll give Rivera that on both counts. And Oher has looked better as practice has progressed. He's still the guy, no doubt about it. But the Panthers also are pleased with the progress of Nate Chandler and Amini Silatolu as the backup. Depth-wise, Carolina is well ahead of where it was at this spot a year ago."

Carolina plans to use Shaq Thompson in a variety of ways

Carolina raised some eyebrows with their selection of linebacker Shaq Thompson with the 25th overall pick of the 2015 NFL Draft, both due to a lack of positional need and projections which had Thompson slipping into the second or third round. However, while Thompson is undersized at six-foot, 228 pounds, he has the speed and versatility to slot anywhere from a traditional linebacking role to hybrid safety -- provided Thompson progresses in standalone pass coverage.

He's been lining up with the linebackers for most of training camp, but we've also seen him set up as a pass rusher and at safety in some run-stopping packages. Expect him to line up all over the field during the regular season.

Funchess has given Ron Rivera and the Panthers coaching staff a close up look at his immense potential, but he still has had his fair share of rookie struggles, which has kep him from rising up the depth chart. Kelvin Benjamin is obviously still the clear No. 1 option, Corey "Philly" Brown, Ted Ginn, and Jerricho Cotchery.

However, he'll see plenty of needed action in the preseason. If he plays well, he could grab the No. 3 spot.