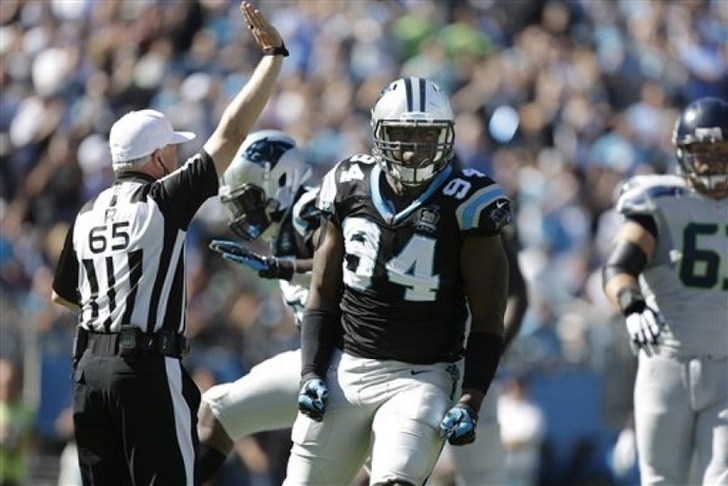 The Carolina Panthers enter training camp with most of their roster and starting 22 intact, but there's still plenty of intrigue to be had when it comes to in-camp competitions at a handful of positions. Here's our list of the 3 Crucial Position Battles In The Panthers' 2015 Training Camp.

The Carolina Panthers never quite put together a viable stopgap to paper over Greg Hardy's near full-season absence in 2014, employing the trio of Wes Horton, Kony Ealy and Frank Alexander to fill the void to mixed results. Hardy's now out of the picture, putting the onus on one of those three guys to emerge as a legitimate starting option. Our money's on Ealy who led the trio with 18 quarterback pressures last year -- nine of those in the team's last four games.

Kelvin Benjamin will be the #1 receiver for the Panthers in 2015. We at least know that. After that, it's a crapshoot of epic proportions with the likes of Jerricho Cotchery, Devin Funchess, Ted Ginn, Corey Brown and Jarrett Boykin set to duke it out in camp for what will likely be a tenuous spot as the team's #2 wideout. Cotchery may be the current favorite thanks to his 48 catches last year (3rd on the team), but there's also a chance Carolina tries to get a jumpstart on the future and tabs Funchess as the guy right off the bat.

Mike Remmers has bounced from practice squad to practice squad over his career, but it appears he's finally found a home in Charlotte. After entering the starting lineup for Nate Chandler last season, Remmers was not tagged with giving up a single sack. However, his struggles in the team's playoff loss to the Seattle Seahawks has reopened the door for Chandler and fourth-round pick Daryl Williams to challenge him for a starting spot.