Panthers Blowing Out Seahawks At Halftime 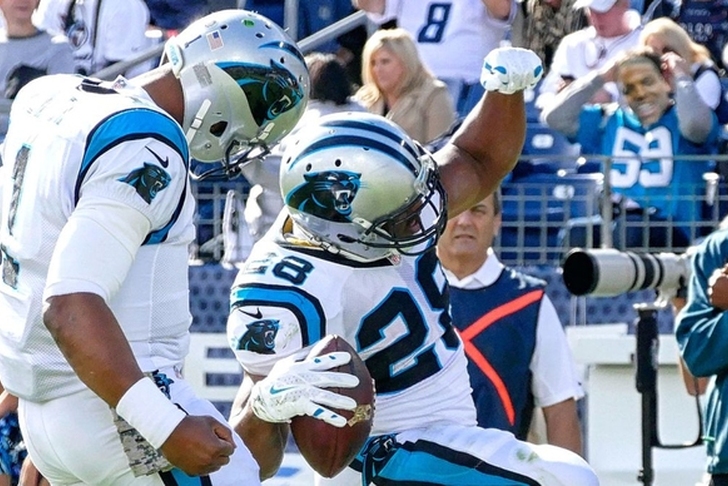 The first play from scrimmage in the NFC Divisional Round game between the Carolina Panthers and Seattle Seahawks was a 59-yard Jonathan Stewart run. That set the tone for a dominating first half by the Panthers. Behind a lights-out defense and a sharp offense, the Panthers hold a 31-0 lead at the half.

The Panthers outgained the Seahawks by a wide margin; 220 to 123. Seattle converted just one of four first down tries, while the Panthers were five for six.

Cam Newton was sharp through the air, completing 8 of 11 passes for 102 yards and a score.

The Seahawks had nothing going on the ground, racking up a mere 30 yards on eight carries. Nearly all of that damage came on three carries that went for a combined 24 yards.

QB Russell Wilson wasn't much better, completing 10 of 17 passes for 111 yards and two picks. One of those interceptions was a pick-six. He was sacked twice for a loss of 18 yards.

The Panthers marched down the field on their first drive, going 75 yards in four plays. All of those plays were on the ground. Seattle's first drive ended in a pick-six by Luke Kuechly. The next time the Panthers got the ball, they scored on a 15-play drive that took nearly nine minutes off the clock. Another Wilson interception set up a field goal for Carolina that gave the Panthers a 24-0 lead. The Panthers added a touchdown pass to give themselves a 31-0 lead. Seattle was in field goal range with just over two minutes to play, but failed to pick up a fourth down conversion. The Seahawks missed a 55-yard field goal to end the half.