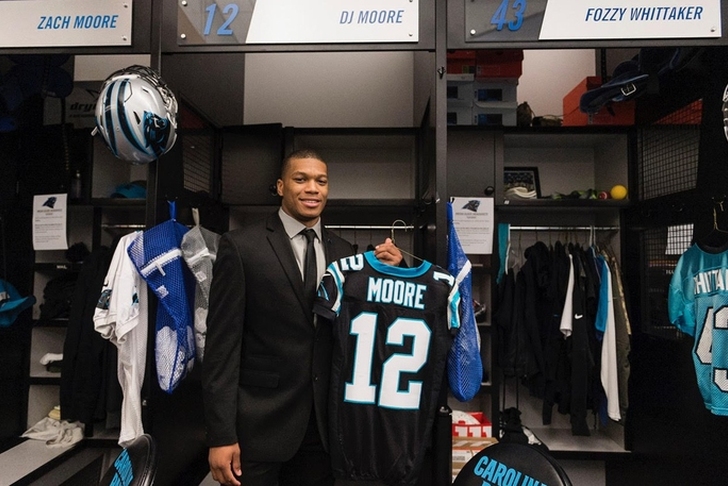 USA Today
Grade: C-
Breakdown: "First-round WR DJ Moore is a nice player, but how much does he diversify an offense that already has so many short-area passing targets (Devin Funchess, Greg Olsen, Christian McCaffrey, Curtis Samuel). Second-round CB Donte Jackson provides 4.3 speed. But at 5-11 and 178 pounds, won't he be seriously overmatched by NFC South WRs like Julio Jones, Michael Thomas and Mike Evans? "

ESPN
Grade: A-
Breakdown: "Like their NFC South rivals in Atlanta, the Panthers went with a wide receiver in Round 1, taking Maryland's D.J. Moore at No. 24. I'm a big fan of Moore, who is more than a workout warrior, though he put up freakish numbers at the combine with a 4.42 40 time and 39.5-inch vertical. He was productive for the Terps, and he's great after the catch. He runs through arm tackles, and he's built like a tailback. The Panthers needed a guy like that for Cam Newton, and it wasn't going to be veteran Torrey Smith (another Terp), who was brought in last month. Moore could be Newton's favorite target in a hurry.

"After parting ways with Daryl Worley, the Panthers needed cornerbacks to compete for the spot opposite James Bradberry. They added two on Day 2 with Donte Jackson (pick 55), one of the fastest players in this class (4.32 40), and Rashaan Gaulden (85), whom I had rated as more of a sixth-round talent. (Remember that veteran safety Kurt Coleman is no longer with the team.) Jackson is only 5-10 and 178 pounds, but he's an elite athlete. Ian Thomas could develop into the heir apparent to Greg Olsen, and to get my fourth-ranked tight end at 104 is great value. Marquis Haynes (136) is another good player on Day 3.

"If there's an issue with this class, it's not getting a pass-rusher. Are they really going to rely on 38-year-old Julius Peppers to play almost 500 snaps again? Mario Addison is also going to be 31 by Week 1, and you face Matt Ryan, Drew Brees and Jameis Winston six times a year in that division. I liked the depth of this class, though, and won't ding it too much. There is value from top to bottom."

Bleacher Report
Grade: C
Breakdown: "The natural comparison for new Carolina Panthers receiver D.J. Moore is Steve Smith, as he's tough, quick and effective after the catch. Moore doesn't create easy separation as often as his combine numbers would suggest but was worth a late first for the playmaker-starved Panthers. The 21-year-old should give the offense an immediate boost.

On Day 2, the team resupplied the secondary, starting with Donte Jackson. He's lacking size and bulk, so No. 55 overall was a reach in regards to paying a premium for a smaller corner. Former Tennessee Volunteers defensive back Rashaan Gaulden may have to play safety after a disastrous combine, but his tape is better than his play in shorts.

The Panthers did well on Day 3, though. They stuck with higher-profile FBS prospects in hopes of getting production early on. Both tight end Ian Thomas and edge-rusher Marquis Haynes are athletic enough to play now and continue their development in the future."

SB Nation
Grade: B
Breakdown: "Carolina has needed a lead wide receiver since Steve Smith was dumped, and in D.J. Moore they got a receiver who compares favorably to him. Wide receivers slid in the first round, so getting Moore at No. 24 was a good value choice. He should see a lot of targets from Cam Newton.

"Secondary was arguably Carolina’s biggest need in the draft, and it was addressed with the 55th pick by taking LSU cornerback Donte Jackson. His athleticism and speed can’t be questioned. In the NFL, he’ll have to get stronger because more physical receivers can simply bump him off. But if he’s covering smaller guys, Jackson can make plays. The Panthers got another secondary player in the third round in Rashaan Gaulden. He’s a combo safety and cornerback who at the least gives Carolina a really good depth piece.

"One of the better value picks of the draft was the Panthers getting Indiana tight end Ian Thomas with the first pick of the fourth round. He’s one of the draft’s best all-around tight ends. Edge Marquis Haynes left Ole Miss with the school record in sacks and tackles for loss, and could be a nice situational player for Carolina."

Yahoo Sports
Grade: B
Breakdown: "The Panthers needed secondary help, and added fast cornerback Donte Jackson and physical, versatile safety Rashaan Gaulden. Tight end Ian Thomas was a nice pick to start the fourth round; he could be Greg Olsen’s eventual replacement. First-round pick D.J. Moore, the first receiver selected, will help Cam Newton. Assuming Moore can be a difference maker, it’s easy to like what the Panthers did."

Sports Illustrated
Grade: A-
Breakdown: "Generally the Panthers think that having a talented defensive front seven can make mid- and late-round defensive backs play better. But this year, most of the front-seven players in Carolina are under contract through 2020 or beyond, while every defensive back—save for slot specialist Captain Munnerlyn—is due to hit free agency before then. So, restituted GM Marty Hurney went defensive back with his second and third picks, taking speedy, boom-or-bust corner Donte Jackson and multifaceted safety/slot man/corner Rashaan Gaulden.

"Before that, however, Hurney addressed Carolina’s putrid wide receiver situation. With all wideouts still on the board, he took D.J. Moore, who some see as a potentially more polished DeAndre Hopkins. Moore’s success playing with Cam Newton could come down to his ball adjustment skills. Fourth-round tight end Ian Thomas is also an important selection. The Panthers, with their multi-actioned rushing attack and play-action game, are at their best in two-tight end packages, but they entered the draft without a quality contributor behind Greg Olsen."