Eagles vs. Panthers: 3 Things We Learned From Each Team 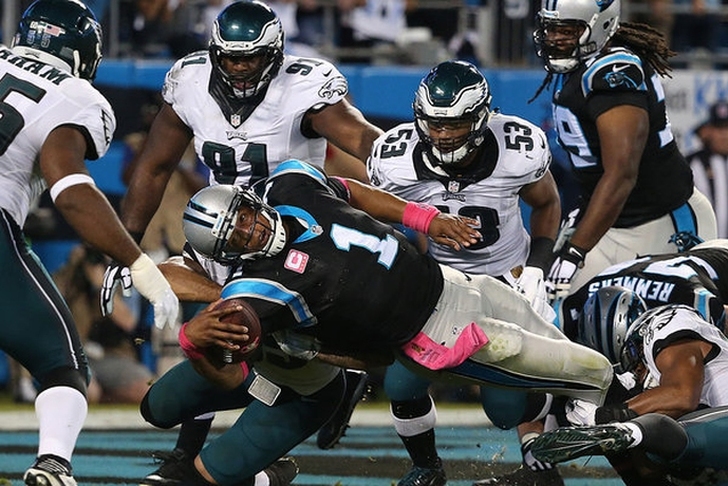 The Carolina Panthers stayed undefeated with a 27-16 victory over the Philadelphia Eagles on Sunday Night Football, handing the Eagles their fourth loss of the season. Here are three things we learned about both teams in the game:

The Panthers are for real. If we didn't know after their comeback victory over the Seahawks, we saw it in the way they dominated a good Eagles team from start to finish. Many overlook Carolina as a legitimate Super Bowl contender, but that's exactly what they are after six games.

Carolina's might be fine without a passing game. A lot has been made of Carolina's dreadful receiving core, which only got worse when star wideout Kelvin Benjamin tore his ACL in the preseason. However, this team has turned to what they do best - running the ball - and are using that to be successful, bucking the current pass-happy trend in the NFL.

Cam Newton's got some magic in him this year. He may not be the most accurate quarterback or even a tradtional dropback threat, but he's deadly when they need him to be. He continuously converted big thrid downs to keep drives alive and was super effective in the red zone, as he's been all season.

Philadelphia's passing game is not very good. Receivers dropped countless passes in this one, most of which came in key third down situations that didn't do this offense any favors.

They aren't converting enough first downs for their up-tempo offense to work. The Eagles did run 81 plays against the Panthers, but only had four drives where they picked up more than one first down. Chip Kelly's offense is designed to wear down opposing defenses - that doesn't happen if they can't sustain drives.

Ryan Mathews is a better fit for Philly's offense than DeMarco Murray. This thought has been surrounding the Eagles for some time now, and it proved to be true again against the Panthers. Mathews ran for 97 yards and a touchdown on just six carries, while Murray racked up just 65 yards on 18 carries.