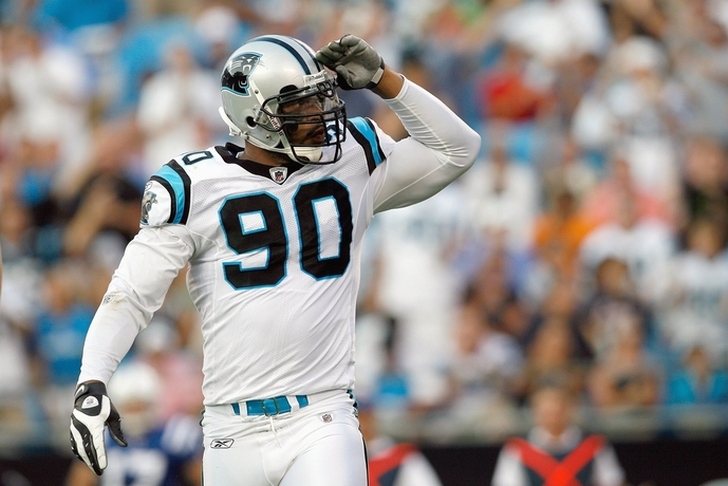 NFL Free Agency isn't over yet, but we're through the first week and over 100 players have signed. Among the teams close to being finished is the Carolina Panthers. The front office didn't have a boatload of cap space to work with, but they still found a way to make a few notable moves this free agency.

This grades include trades, retirements, signings, re-signings and releases. With that in mind, here's our free agency grade for the Panthers.

Carolina sured up a lot of their weaknesses with this haul, strengthening their roster from top to bottom. The most important thing was franchising DT Kawann Shot, and fulfilled a need by upgrading their secondary. Mike Adams isn't anything more than a stopgap at safety, but he led the Colts in tackles last year and was second on the team in interceptions, providing the Panthers with a reliable player on the back end of the defense. Then there's Captain Munnerlyn, who finally gives the Panthers a quality slot corner. Bringing Julius Peppers back was great for sentimental purposes, and while he can still produce, he is just a short-term solution as Carolina tries to improve their pass rush.

On offense, gambling on Matt Kalil - who was a franchise left tackle for the Vikings a few short years ago - could pay off in a huge way. The Panthers really needed an upgrade at the position, and even if Kalil doesn't turn into the player he once was, he is still better than what Carolina has been dealing with. Johnson replaces Ted Ginn as the passing game's deep threat, and Shepard is a special teams ace.

The Panthers really needed to improve their receiving core, and that meant parting with two below-average receivers in Ginn and Brown. Ginn had success in the deep threat role, but was afraid of contact and dropped WAY too many passes - especially would be touchdowns. He is also extremely one dimensional. Brown also was never able to produce at the level the Panthers were hoping.

Johnson was only active for half the season, so losing him isn't a huge deal. As for Ealy, he didn't have the breakout season everyone expected after his stellar Super Bowl. His 2016 numbers were exactly the same as his 2015 numbers, and Carolina decided to part ways with him via trade. However, he still has a lot of upside as a young player, and the fact that the Patriots wanted him makes me wonder if Carolina should have given up on him.

Grade: A-
The only move Carolina made that I don't consider to be a good move is the Ealy trade, but I understanding the reasoning for it (received a second-round draft pick), and it could turn out well if that draft pick is able to make an immediate impact. Outside of that, everything else made the Panthers better - they just don't get a 'A' or 'A+' because they didn't bring in a top-tier player.

Back to the Carolina Panthers Newsfeed
30 shares Share on FB Share on Twitter
Another article you might like: NFL Rumors: Jamal Adams Trade?, Hunter Henry Latest, Sam Darnold or Lamar Jackson & The Match With Tiger Woods, Phil Mickelson, Peyton Manning and Tom Brady >>