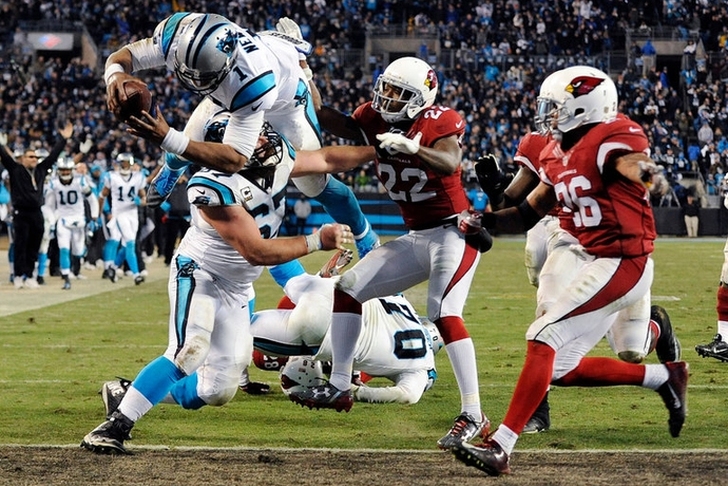 The Carolina Panthers come out of their bye week with a dismal 1-5 record - far from where we thought this team would be. Now comes a NFC Championship Game rematch against the Arizona Cardinals, and the Panthers are hoping to use that as a springboard towards a great second half of the season. Here are three reasons why the Panthers will do just that and beat the Cardinals:

3) Carolina's rush defense
Arizona has had some problems with their passing attack and are dealing with several injuries at receiver, which has caused them to rely more on their running game in recent weeks. They've managed to rack up some wins by relying on running back David Johnson, but that won't be the case in Charlotte. For all of Carolina's defensive troubles, they rank seventh in the league against the run. With them getting both James Bradberry and Robert McClain back at cornerback - plus Arizona's problems at receiver - the Panthers will be able to focus even more on the run.

2) Cam Newton's revenge tour
It was this time last year when Newton's MVP season really took off. This year, injuries and inconsistent play have kept him from living up to expectations. That has frustrated him, and both he and the team took the bye week to help them get back on track. Newton is perhaps the most dangerous player in the NFL as it is - but with this chip on his shoulder, he should dominate.

1) Determination of the entire team
Taking that a step further, this whole team knows what they have in front of them. They are not satisfied with their level of play so far this year, but with Arizona's struggles, the window to the top of the division - and the playoffs - is still wide open. Call it a Super Bowl hangover, but this team has woken up and are determined to play up to their potential. That edge will give them a major, well, edge over the Cardinals.