3 Reasons Why The Panthers Are GUARANTEED To Beat The Cardinals 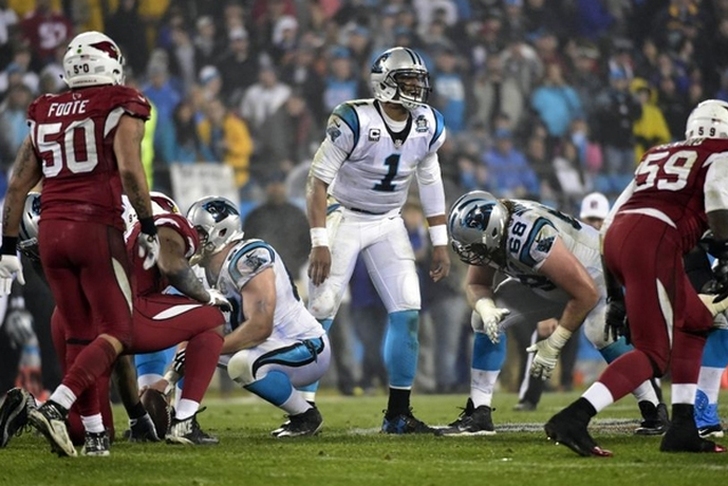 The Carolina Panthers are set to host the Arizona Cardinals in the NFC Championship Game on Sunday, putting them just one win away from making the Super Bowl for the second time in franchise history. Both teams have been at the top of the NFC all season, but Carolina posted the better record with a 15-1 mark. The Panthers also eliminated the Cardinals from the first round of the playoffs last year in Charlotte, and they're poised to end the Cardinals' season again. Here are three reasons why:

3) Dominant, ball-hawking defense
You know about linebacker Luke Kuechly and cornerback Josh Norman, but what this defense is doing as a whole is extremely impressive. They ranked fourth in the NFL in total defense (318.7 yards allowed per game) and ninth in points allowed per game (19.9) this year, and they're peaking at the right time. Most impressively, the lead the league in takeaways with 36, which is three more than anyone else has this season.

If the Panthers don't stop you, they'll take the ball away from you. That's a big problem for the Cardinals, who averaged a turnover and a half per game this year - and turned it over twice against the Packers last weekend.

2) Better suited for the weather
This is what Bank of America Stadium looks like right now:

Somewhere under this snow at Bank of America Stadium is tarp. The Panthers hope to... https://t.co/6OoU5vCydY pic.twitter.com/dx9IUmjftQ

Is that better suited for a ground-and-pound, physical football team, or for a team that relies on an explosive, downfield passing attack? The answer is obviously the running team, which in this case is Carolina. Though the weather won't be quite as bad on Sunday, it won't be great, giving the Panthers another big advantage.

Read more about this game in the Chat Sports iPhone and Android apps.

1) Cam Newton's exclamation point on his MVP season
No one doubts Cam Newton's ability anymore, but the fact that several people think Carson Palmer will outplay him is simply laughable. Despite an obvious lack of notable offensive weapons, Newton thew for 3,544 yards and 33 touchdowns with just 10 interceptions while rushing for 626 yards and eight more scores this season. Most importanly, he's elevated the level of play of everyone around him so much that he's led a group of anonymous offensive players to the NFC Championship Game.

Palmer had a great season in his own right, but his career postseason stats are nowhere near good. He has passed for four touchdowns and three interceptions while completing under 56 percent of his passes in two full postseason appearances. Newton will show everyone - again - that he's the best player in the NFL.