They Said It: Brind’Amour, Martinook, Aho on shutout loss to Wings 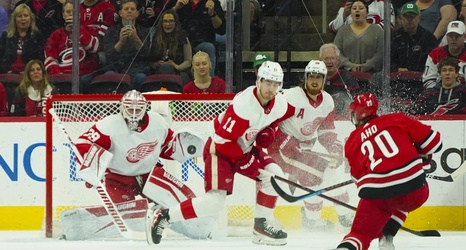 The Carolina Hurricanes suffered a shutout loss to their former netminder Thursday night in PNC Arena, falling 3-0 as Alex Nedeljkovic posted a 46-save shutout against his old squad.

Nedeljkovic was outstanding for the entire night, turning away 24 high-danger chances in a game where the Hurricanes dominated every statistic except the final score and the special teams battle.

Here is what they had to say:

On if this just a game where you tip your cap to Nedeljkovic and move on: Yup.