They said it: Brind’Amour, Hamilton, Aho, McGinn, Slavin on clinching first round series 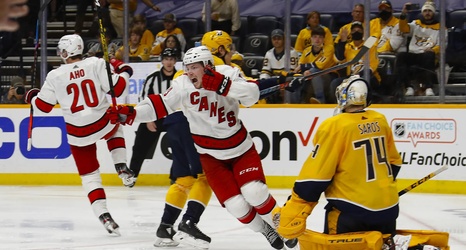 The Carolina Hurricanes clinched their first round series against the Nashville Predators with a 4-3 overtime win in Game 6 Thursday night at Bridgestone Arena.

The team came back from a two-goal deficit thanks in part to a two-goal performance, including the overtime winner, by Sebastian Aho as well as the late tying goal by Dougie Hamilton.

After the game, head coach Rod Brind’Amour as well as Hamilton, Aho, Jaccob Slavin and Brock McGinn spoke to the media via Zoom. Here’s what they had to say:

On the leadership group driving the game: That’s a great point.