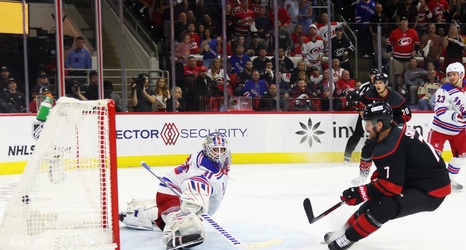 In another tightly contested game with another unlikely goal-scoring hero, the Carolina Hurricanes took hold of a 2-0 series lead Friday night with a 2-0 win over the Rangers in PNC Arena.

Defenseman Brendan Smith broke the stalemate in the second period, while Sebastian Aho added an empty netter to ice things. Antti Raanta picked up the first postseason shutout of his NHL career, stopping all 21 shots he faced Friday night.

Getting it from everybody

If you had Ian Cole and Brendan Smith as the providers of the first two game-winning goals in this series, please stop lying.