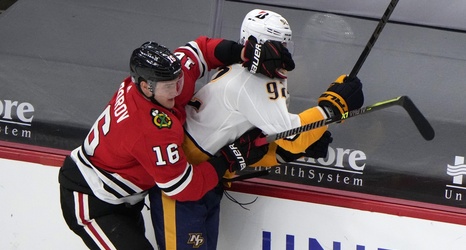 Despite having only turned 26 in April, Nikita Zadorov is already primed to sign his fifth NHL contract.

The bruising 6’6″ defenceman became a Flame on Jul. 28 as part of a trade that saw Toronto’s 2022 third-round pick, previously acquired in the David Rittich trade, transferred to Chicago.

Zadorov’s tenure in Chicago lasted just one season. After being sent from Colorado to Illinois last October in exchange for Brandon Saad, Zadorov immediately signed his one-year, $3.2 million qualifying offer and played 55 games in Chicago’s colours.

The Avalanche had previously signed Zadorov to another one-year, $3.