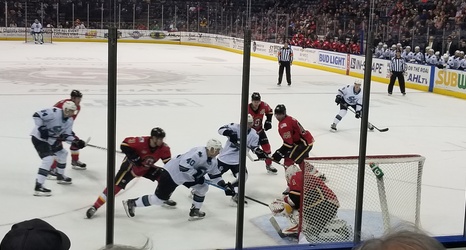 Stockton played a home and home series with the San Jose Barracuda this weekend, which was bad news for the Heat. Someone asked me who owns the Heat? I said “Owns… Owns…” San Jose owns the Heat, as Stockton had a 0-8 record against their Northern California rivals going into the weekend.

On Friday, most of the play was in the Heat zone, as pictured below.

The Stockton faithful cheered when Jon Gillies got yanked after he gave up four goals on 17 shots in 23+ minutes, his sixth hook of the season.