Rate the Flames (4) at Hurricanes (3): Thanks for the Players Carolina! 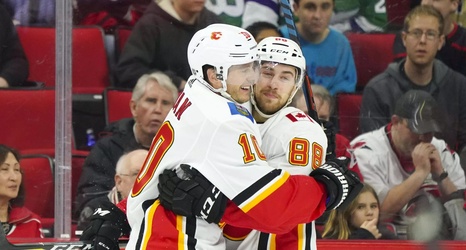 The Calgary Flames and Carolina Hurricanes met for the second time in less than two weeks and last summer’s blockbuster was the theme of the game. It was the return of Elias Lindholm, Noah Hanifin, Derek Ryan, and Bill Peters to Carolina and it was a feisty affair.

Calgary won the game 4-3, and it in a very interesting detail, every goal featured at least one player getting a point against their former team.

For the Flames Derek Ryan had one of his best outings as a Flame, picking up a goal and an assist, Noah Hanifin had a goal, Elias Lindholm scored, and Garnet Hathaway had the other goal.