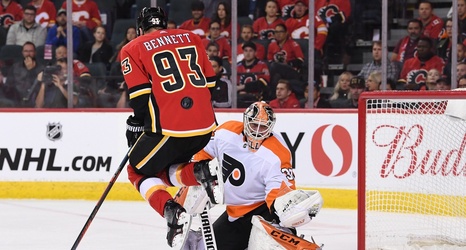 The Calgary Flames returned home after a pretty uneven road trip on Tuesday night. They commemorated their return to the Saddledome with another fairly uneven effort. However, it was good enough to edge the visiting Philadelphia Flyers by a 3-1 score.

For just the second time this season, the Flames opened the scoring. Michael Frolik nabbed an errant dump-out by the Flyers inside the offensive blueline, walked into the slot and beat Elliott stick-side to make it 1-0 Flames.

What's better than scoring a goal in your 800th game? Immediately being surrounded by Swedes pic.