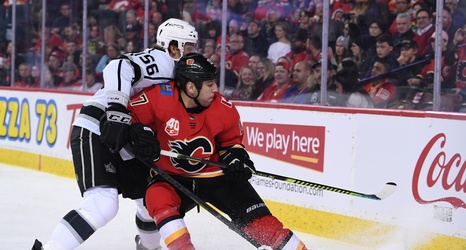 On Thursday night, the Calgary Flames wildly out-played the Buffalo Sabres in a game that was only close because of too many penalties. On Saturday night, the Flames did a much better job of staying out of the box and skated to a very solid victory over the Los Angeles Kings by a 4-3 score.

This may sound familiar, but the Flames played pretty well in the first 10 minutes of this game but didn’t score. Then they took a penalty and got scored on. Tobias Rieder took a pretty blatant interference penalty in the defensive zone.