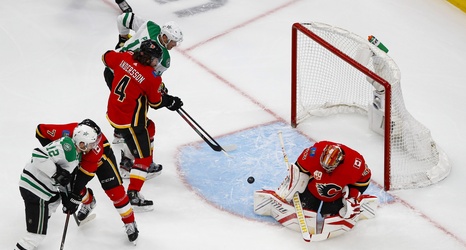 The Calgary Flames have been a weird team in 2019-20. Sometimes they’re great. Sometimes they’re awful. They were both in Game 6 of their first round series against the Dallas Stars. Unfortunately, their awful second period completely undid their great first eight minutes.

The Flames lost 7-3 to Dallas in Game 6. They have been eliminated from the 2020 Stanley Cup playoffs.

The Flames got out to a fantastic, energetic start and were rewarded early and often. Just under four minutes into the period, they got on the board. Some nice puck cycling and forechecking got the puck to TJ Brodie at the point.