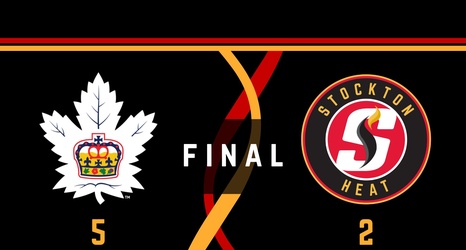 The Stockton Heat have now lost eight of their last nine games. Seven of those losses have come in regulation time.

In short: things aren’t going so well for Cail MacLean’s squad at the moment.

Wednesday’s game, against the Toronto Marlies, offered some early hope. The Heat managed to get out of the first period unscathed, outshooting Toronto by a 12-11 margin in the scoreless first 20 minutes.

In the second, Luke Philp got the Heat on the board after an unfortunate miscue by Marlies goaltender Joseph Woll. Stockton’s one-goal cushion would not last, however, with Kalle Kossila tying it up late in the period and Tyler Gaudet scoring the go-ahead goal for his Marlies team early in the final frame.