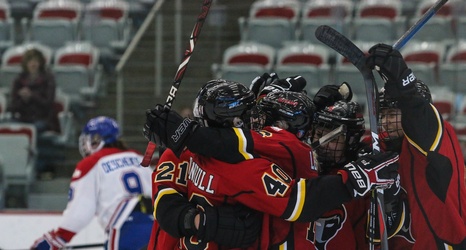 The top two teams in the CWHL split their final series against one another in the regular season while the Calgary Inferno clinched home ice in the playoffs.

The Calgary Inferno won the season series against Les Canadiennes, going 4-2-0 against the second best team in the league. The Inferno continue to hold the first place spot and with their win over Montreal on Saturday, they officially clinched home ice in the playoffs.

The first period started out with some end to end action and both goaltenders putting up great performances. Slightly past the midway mark, the Inferno took their second penalty of the game, and with arguably the best powerplay unit in the league, Hilary Knight made it 1-0 for the Fabs.