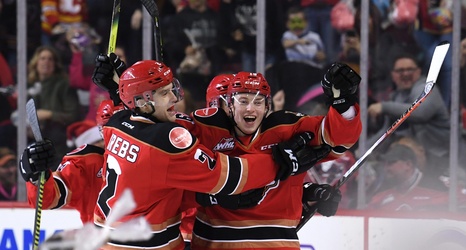 The Calgary Hitmen played three games in three days over the past week. They captured three of a possible six points and stayed firmly in the thick of the Western Hockey League playoff race. Oh, and over 25,000 teddy bears were hurled towards the ice on Sunday.

The Hitmen had a three games in three days type of weekend.

On Friday, the Hitmen beat the Regina Pats 4-1 in Calgary. The Hitmen trailed after the first period, but scored four unanswered goals – from Hunter Campbell, Riley Stotts, Jonas Peterek and Carson Focht – to power themselves to a win.