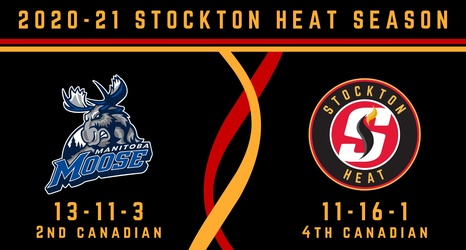 The Stockton Heat haven’t won back-to-back contests since Mar. 10 and 11, the final two dates of the team’s eight-game winning streak.

They’ll look to change that on Tuesday evening when they take on the Manitoba Moose for the fourth meeting of a five-game series.

The Heat won Monday afternoon’s clash in a shootout, with Adam Ruzicka scoring two points (plus a shootout goal) and goaltender Andrew Shortridge making 38 saves for his first win of the season.

Alexander Yelesin also scored for Stockton, which improved to 11-16-1 this season. Matthew Phillips sealed the victory with the shootout-winning goal.