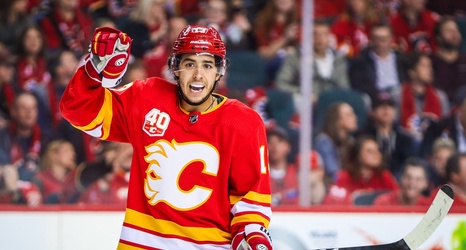 The Calgary Flames played arguably their best game of the season on Thursday against the Buffalo Sabres. Part of the credit has to go to interim coach Geoff Ward, who shuffled lines heading into the game and then shuffled again mid-game.

There’s been a lot of chatter about Johnny Gaudreau so far this season. One of the top offensive players in the entire NHL last season, he hasn’t seemed his usual self this season. (He’s currently 60th in the league in points after being top 10 in 2018-19.)

With an eye towards sparking Gaudreau a bit, Ward shuffled the lines up:

Midway though the game, seeing Gaudreau had responded to the shuffle, Ward flipped Dube back to his “usual” spot with Ryan and Lucic and put Gaudreau back together with Monahan.