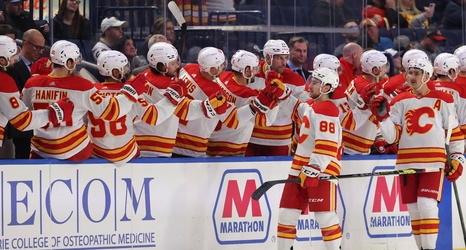 The Calgary Flames came into Buffalo hoping to find consistency, puck possession, and a win. They found all three of those things in a very one-sided 5-0 victory over the Sabres on Thursday night.

The win gives the Flames a 2-1-2 record through the first five games of their seven game road trip.

The Flames got oodles of good scoring chances in the opening period, but they opened the scoring off a gorgeous pass by Matthew Tkachuk to spring Johnny Gaudreau on an almost-breakaway. Gaudreau received the pass and held off the defender long enough to beat Dustin Tokarski with a quick shot to give the Flames a 1-0 lead.