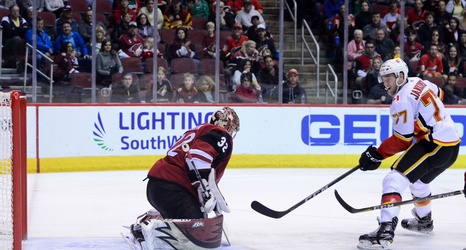 The Calgary Flames will be gunning for a sixth straight win when they wrap up a two-game road trip in Arizona on Tuesday night as +115 underdogs on the NHL odds at sportsbooks monitored by OddsShark.com.

Calgary remained perfect under interim head coach Geoff Ward with a 5-4 overtime win in Colorado on Monday, and now sits third in the Pacific Division standings, just four points back of Arizona and Edmonton, going into Tuesday night’s matchup at Gila River Arena.

The Flames also exacted revenge in Monday’s win, halting a three-game losing streak against Colorado, a slide that included a pair of defeats during last season’s first-round playoff series loss to the Avalanche.