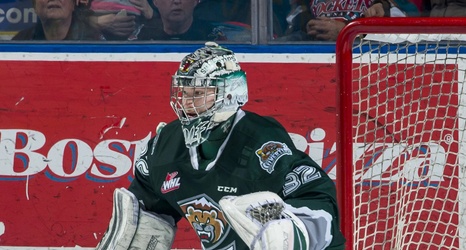 Ho hum. Just another post season award for the Flames most exciting goaltending prospect in who knows how long. Dustin Wolf was named WHL Goaltender Of The Year today after another outstanding season with the Everett Silvertips. Wolf compiled a record of 18-3-0, a GAA of 1.80 and a Save% of .940. Incase you forgot, Wolf won this award last season as well. Not enough? He was also named the U.S. Division Player of the Year and Goaltender of the Year to boot. Not bad at all.

This season Wolf got to accomplish another career milestone as he made his AHL debut with the Stockton Heat, going 2-1-0 in limited action.