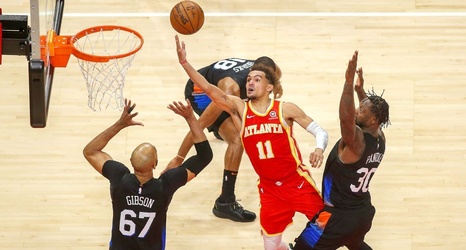 At the end of a Game 2 loss to the New York Knicks on Wednesday, Atlanta Hawks guard Trae Young -- the newly-minted subject of Knicks' fans aggression -- walked off the court looking back towards the fans.

He told the crowd that the Hawks would "see you in the 'A.'"

On Friday night, Young and the rest of the Hawks welcomed New York to Atlanta with a 105-94 Game 3 win to take a 2-1 advantage in the first-round series in front of 15,743 fans at State Farm Arena.

The Knicks were more aggressive in defending Young on Friday, blitzing him more as they tried to slow down his scoring efforts.