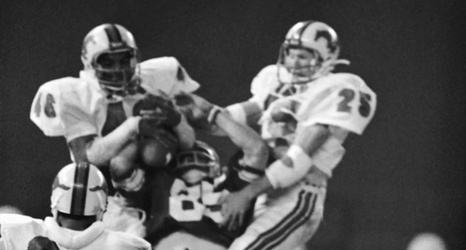 SALT LAKE CITY — BYU fans won’t soon forget the 1980 Holiday Bowl, which is appropriately memorialized as the “Miracle Bowl.” The Cougars came out on top of SMU 46-45 with a late fourth-quarter scoring barrage which was capped off by a Hail Mary touchdown pass from BYU quarterback Jim McMahon to tight end Clay Brown.

ESPN’s Bill Connelly remembers it well, too, along with coach Hall Mumme, who is featured as one of the pioneering coaches of the spread offense in a series of articles.

“Watching LaVell Edwards’ BYU team score three touchdowns in four minutes to beat an old-school, power-heavy SMU team — in one of the sport’s greatest games, no less — while gaining 446 yards through the air and losing 2 yards on the ground, was all the proof of concept Mumme needed,” Connelly writes in his article ‘The 25 most important games in college football’s spread revolution.