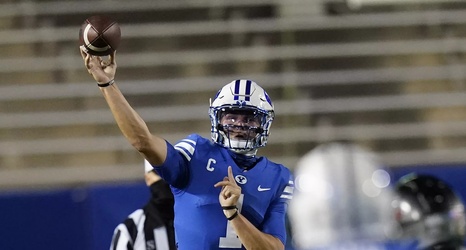 PROVO — Absolutely no rust showed in Zach Wilson after BYU took nearly three weeks off. He was as good Saturday in cutting apart Troy’s defense as he was in dissecting Navy in the season opener a very long time ago.

Wilson threw it long, dumped it short, lobbed it over a defender to Isaac Rex for a second-quarter touchdown that was nothing but a perfect touch-target pass while running to his left.

On this night he was money with an unlimited bank account in leading BYU to a 48-7 win.

This after stretches of no team practices, assembling in “pods” for workouts, and a game canceled due to COVID-19 after a flare-up on the squad.